Since 1985, Utah has provided an opportunity for prepared high school juniors and seniors to take college courses while still in high school. Through the Concurrent Enrollment program, students earn both high school credit for graduation and college credit corresponding to the first year at a college or university in the Utah System of Higher Education (USHE).

In 2014-15, participating students registered in 69,096 classes, earning 198,163 semester credits. Over ⅔ of the credit earned fulfilled general education requirements for college graduation – credit transferable among all eight USHE institutions. The top enrolling class is Math 1050, followed by English 1010. 21% of the credit earned is in STEM CTE courses.

Concurrent enrollment provides a significant cost savings opportunity for high school students in Utah who attend a USHE institution. It is estimated that Utah high school students would have paid $32.5 million in tuition for the 198,163 credits hours awarded in 2014-15. This amounts to anywhere between a $1,300 to $13,500 saved per student (depending on variables such as credits earned, status after graduation, and college enrollment). In recent years, the state legislature has allowed a small fee that a USHE institution may charge students.  However, even with a small fee, concurrent enrollment serves as a significant scholarship opportunity for Utah high school students. 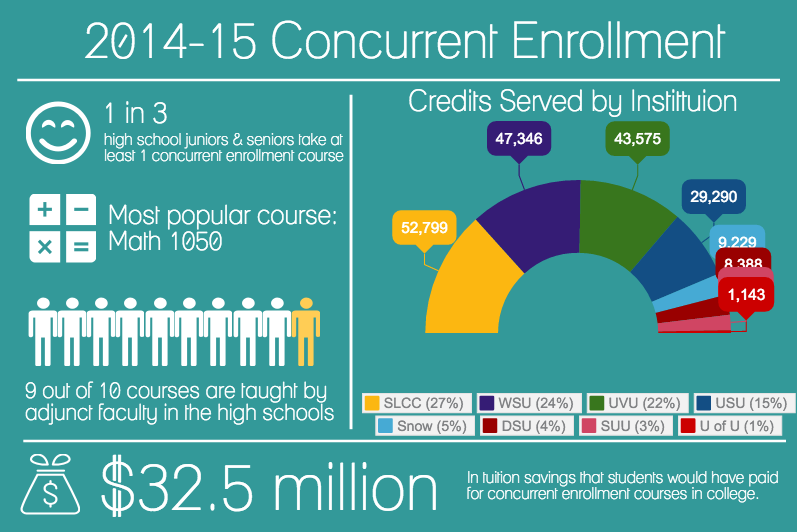