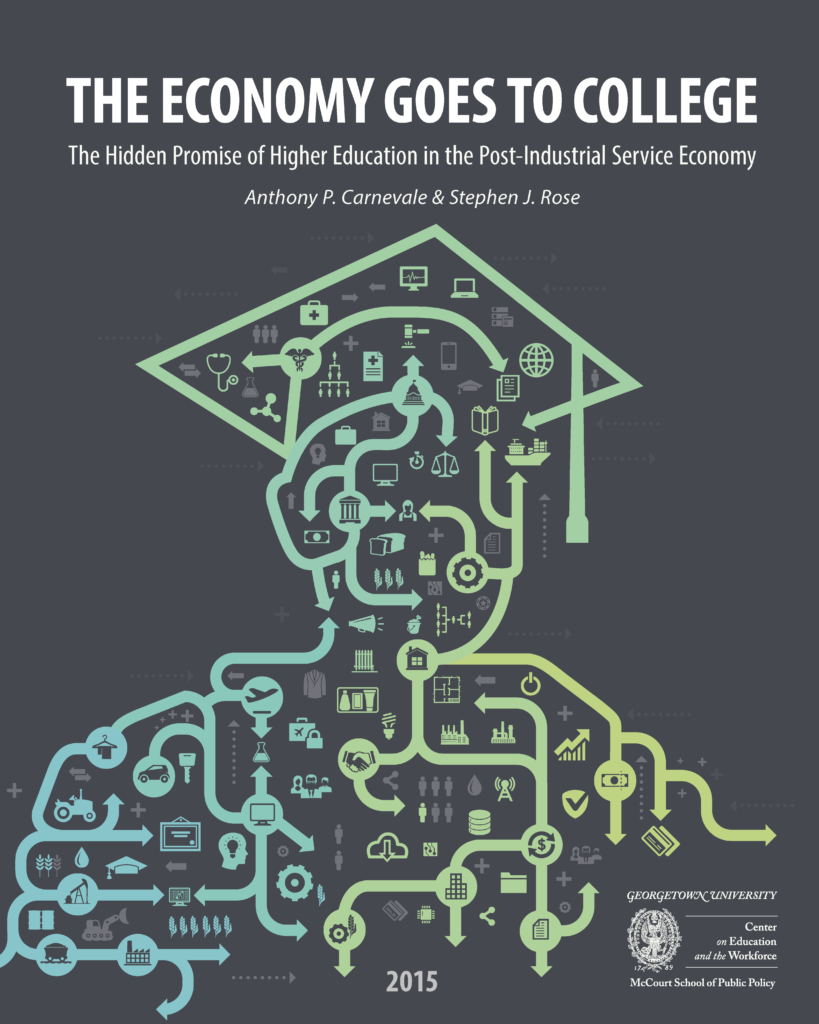 A common, rather pessimistic argument on the state of today’s economy is that it puts more and more college-educated, skilled workers into dead-end service jobs for which they are overqualified.

The shift in America’s workforce has not been from factories to fast-food outlets. Rather, employment growth has come in offices and non-office settings—like hospitals and schools—that provide higher-skill services and require a college-educated workforce.

In a new report by the Georgetown University Center on Education and the Workforce, The Economy Goes to College: The Hidden Promise of Higher Education in the Post-Industrial Service Economy, authors Anthony Carnevale and Stephen Rose argue that the transition from an industrial to a service economy has resulted in a shift from an economy rooted in high school-level skills to one anchored in postsecondary education and training.

Change in economy from industrial to service-centered

The two main drivers of change in our economy are what we produce and how we produce it. In 1947, nearly half of US workers were employed in goods-producing industries (manufacturing, agriculture, mining, construction). By 2007, that share had dropped to less than 19 percent of the workforce.

Despite this, a large increase in productivity allowed these goods-producing employers to increase output dramatically without hiring more workers. Employment remained flat in these fields from 1967 to 2011, but during those years, America created 82 million new jobs in service industries. Key growth has come in these higher-skill service jobs, with nearly two-thirds of Americans now working in these higher-skill workplaces, such as business services, finance, healthcare, and education.

Upgrading in skills of American workers

During this time, a remarkable upgrading in the skills of America’s workers occurred. In the 45 years between 1967 and 2012, those with at least some college went from one-quarter of adults to 61 percent of the workforce, while the proportion of high school dropouts fell from 38 percent to 10 percent.

Of total US employment between 1967 and 2007, the share of high-skill managerial and professional jobs grew by more than 13 percentage points. The share of middle-skill jobs declined only modestly, but these jobs have shifted from high school-educated workers toward industrial technicians and service workers with at least some college. The share of low-skill jobs fell from 39 percent to 29 percent of the workforce.

Workers with only a high school education are largely left out of employment in the US economy’s largest and fastest growing sectors—business services, finance, healthcare, and education. Also, the increasing technological sophistication of our economy has only increased the demand for educated workers who can utilize that technology. And as employers have bid up the price for college-educated workers, the real wages of high school-educated workers have fallen.

A college education in today’s economy is more important for success than ever before. Education is not just the preferred path, but increasingly it’s the only reliable path to a middle-class life.