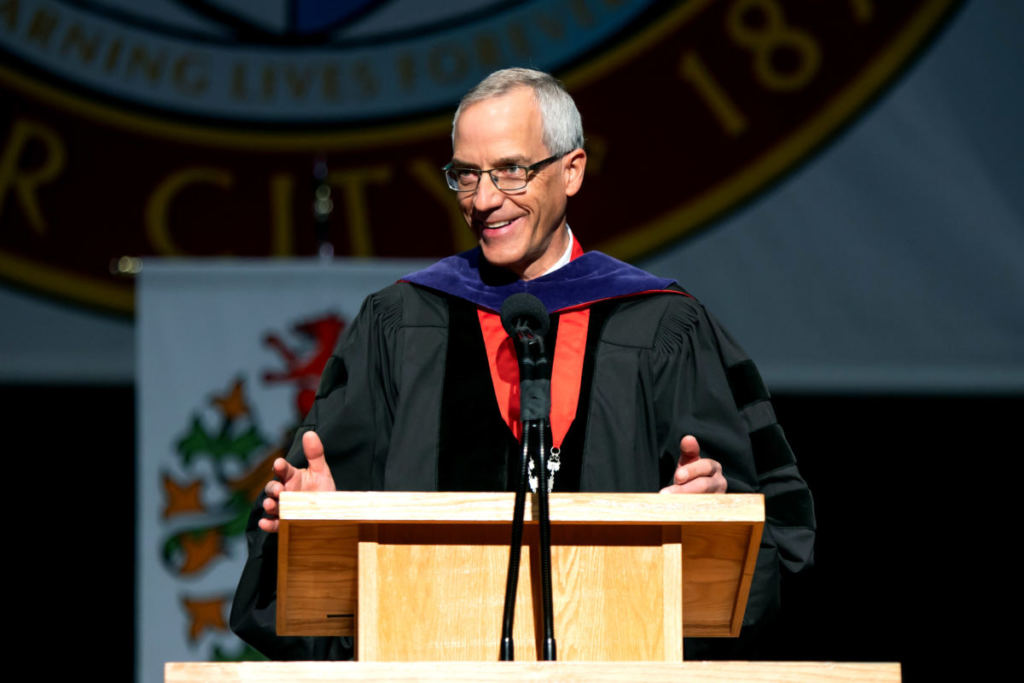 Wyatt will step down from his position at SUU in August 2021 to fill the new position at the system office. The Utah Board of Higher Education will immediately begin a national search for a new president and work over the coming weeks to identify an interim president to serve SUU while the presidential search takes place.

“I am immensely grateful for the years I’ve had at Southern Utah University,” said President Wyatt. “My wife, Kathy, and I have enjoyed the best time of our lives together in Cedar City working alongside our faculty and staff colleagues, its wonderful alumni and supporters, community members, and, of course, SUU’s incredible students. Part of our hearts will stay in Cedar City forever; we will remain supporters of the university for the rest of our lives.”

The former USHE Board of Regents selected Wyatt as the 16th president of the university in November 2013. Under his leadership, SUU has held tuition flat for the past three years, increased student scholarships, reduced student fees, and actually reduced tuition for online students–including launching a $9,000 online bachelor’s of general studies degree. He presided over the largest period of enrollment expansion in SUU’s history, growing enrollments from 8,200 to 13,000 students over six years, while maintaining high-quality academic programming and small class sizes. In addition to enrollment growth, the university’s retention and graduation rates climbed. He led the university in developing the Dual Enrollment Partnership with Southwest Technical College, launched the 3-year bachelor’s degree program, trademarked SUU as the University of the Parks, and initiated what is believed to be the nation’s largest faculty and staff-led student field trip in history. In cooperation with federal and state public land managers, approximately 4,500 people spread out on our public lands in small groups to learn and volunteer on the 100th anniversary of the National Parks Service on August 16, 2016.

“President Wyatt has led Southern Utah University to many outstanding achievements during his eight years as president,” said Dave R. Woolstenhulme, USHE Commissioner of Higher Education. “In the last two years alone, Wyatt has seen SUU through the advancement of its online programming, more than doubling its online offerings. Though he will be missed by the entire SUU community, we are excited to continue our work together in his new role as Senior Executive Director of Statewide Online Education–a position with outcomes that will improve the entire Utah System of Higher Education.”

Wyatt’s priorities as president are summarized in the university’s vision statement: “Southern Utah University will receive national recognition for its innovations in learning, student success, and providing the best educational experience in the Intermountain West.”

“The influence of President Wyatt’s leadership at SUU over the last seven and a half years is unparalleled,” said Rich Christiansen, Chair of SUU’s Board of Trustees. “He and his senior team have ushered in a remarkable period of innovation and growth at the university with a focus on advancing affordability, accessibility and inclusion without sacrificing quality. President Wyatt has been instrumental in enhancing the campus environment and establishing a strong vision for the future. He will be deeply missed at SUU, but we are excited to see the impact he will bring about for online education at the state level.”

Prior to his appointment as president of Southern Utah University, Scott served as president of Snow College, in Ephraim, Utah, served as a member of the Utah House of Representatives, was a partner in the Logan, Utah law firm, Daines, Wyatt & Jenkins, LLP, and served as the elected Cache County Attorney. He earned a J.D. from the University of Utah S.J. Quinney College of Law and a B.S. from Utah State University, with a dual major in Philosophy and Economics.